It's all tooth-less smiles for these Mites! 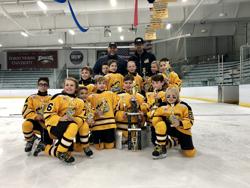 Chicago Stallions congratulate Mite 1 on their tournament championship over Thanksgiving weekend! The team went undefeated throughout the championship, defeating the Rockford Jr. Ice Hogs, Joliet Jaguars and Skokie pilots to get to the championship round.

Mite 1 played the Skokie Pilots in the finals at the Edge on Sunday, facing goalie friend, previous 3-on-3 participant and fierce competitor Tanush Doshi. In a show of true sportsmanship, Tanush was all hugs after the game for his Stallions friends.